Games: Hanzi - Less Than Half Price

Cang Jie is one of the legendary figures in ancient China. As legends foretold, he was inspired by the footprints of animals on the ground, and began to create all kinds of different symbols according to the forms of all things in nature, hoping to replace the conventional, yet unreliable, knot tying way of remembering things. For conveniences, Jie decides to name these symbols “Zi”, which means “character”. This is the origin of “Hanzi”, the “character from Han dynasty”.In Hnz, players travel back 3600 years and serve as one of the pupils of Master Cang Jie. As you learn from the Master, you will create new characters that serve as the foundation of modern Chinese culture.In game terms, you lay out double-sided cards on the table that show the old letters on one side and the newer traditional letters on the other. On a turn, you choose a task card that shows a theme and score points by identifying two of the many kanji that match your theme from among the old letters. Whoever first earns ten points wins. 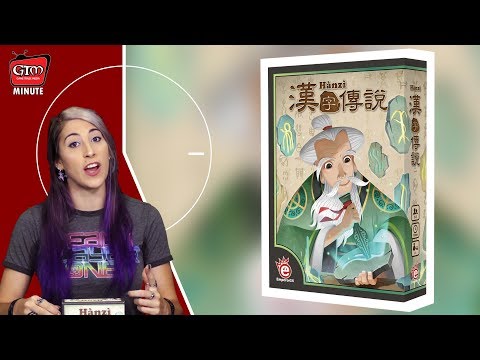