Games: Liberators - Less Than Half Price

In Liberatores: The Conspiracy to Liberate Rome, players are senators that are part of the “Liberatores” — secret conspirators of ancient Rome, whose main goal is to kill Julius Caesar.

There are three roles: an Agent who wants to save Caesar, some Republicans who want to restore democracy to the Roman Republic, and a Competitor who wants to kill Caesar so he can take over and rule Rome as the next dictator. Players must take one of three main actions on every turn: bribe a citizen to increase the influence of the “Liberatores”; hire a citizen to use their special benefits; or send a citizen to Caesar for income, an action that will increase Caesar’s influence. (Note that this is the only way of gaining money in this game.) You may also hire a servant and send it to other players if you think he is the Agent or Competitor; if you guessed right, then their influence will be lowered when the game ends. 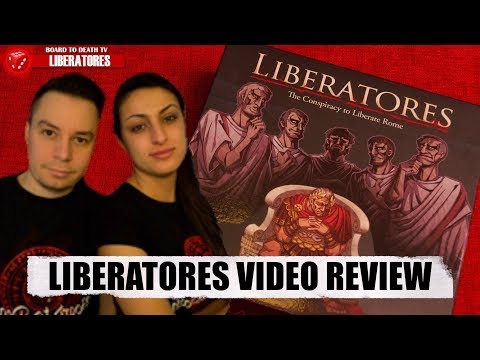 Board to Death Video Review in 5 Minutes!