Neon Gods is a story of street gangs set in a kaleidoscopic near future of heightened reality inspired by sci-fi cinema of the 1970s and 1980s.

Start your own (legitimate) businesses, and watch them flourish. Recruit the finest disillusioned ne’er-do-wells to hold your territory, and purchase black market resources that’ll give you the edge. Be prepared to fight for what’s yours because opponents will muscle in on your territory; defend your territory or shed some blood to take over what others have built. And don’t forget the cops, who clearly don’t have anything better to do than harass innocent business owners such as yourself.

At the end of every third round, players gain points for the territories they control. After nine rounds of play, the player with the most points wins control of the city. The world may not think much of you, but in the back alley glow of the neon night, you can be a god… 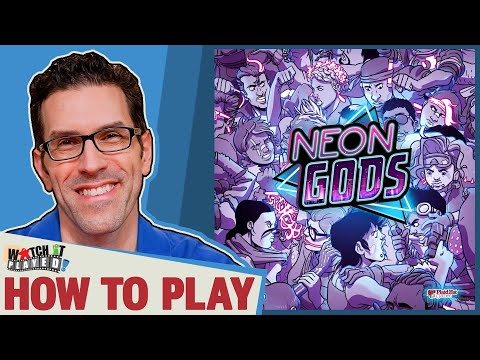 Video:Neon Gods – How To Play