Expand your Star Wars™: Destiny collection with Legacies, a new set of booster packs for the collectible dice and card game! Legacies continues the evolution of Star Wars: Destiny, expanding on classic archetypes while introducing new mechanics, including a new die symbol and a new card type. As a new Base Set, Legacies is a solid starting point for Destiny newcomers while introducing innovative new concepts that challenge classic gameplay and tactics.

The Star Wars universe is a galaxy of change. Fans have watched regimes rise and fall as the legacy of their favorite characters shift and change with the dramatic twists of the generation-spanning saga.

Legacies continues the evolution of Star Wars: Destiny, expanding on classic archetypes while introducing new mechanics, including a new die symbol and a new card type. As a new Base Set, Legacies looks to be a solid starting point for Destiny newcomers while introducing innovative new concepts.

Legacies features a new dice symbol to Star Wars: Destiny. Indirect Damage can be a powerful tool, but comes with a major drawback.

symbol represents Indirect Damage, and allows you to force an opponent to deal that much damage to their characters, distributed as they wish, allowing them to split it up among multiple characters.

When you deal indirect damage to an opponent, they choose how that damage is dispersed among their characters. Indirect Damage is powerful but unfocused—sometimes great effects can even see you dealing indirect damage to yourself. 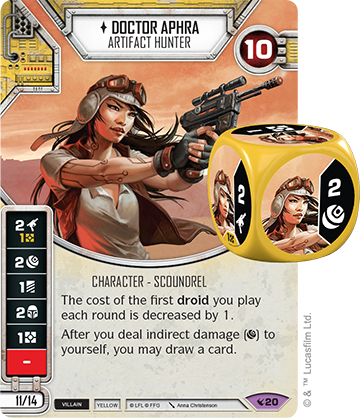 Of course some characters are used to collateral damage, like Doctor Aphra, Artifact Hunter  (Legacies, 20). A brilliant scientist and explorer, Aphra’s life changed forever when she was recruited by Darth Vader after the Battle of Yavin. Aphra enters Destiny at eleven points for a normal version or fourteen for an elite. Her die features a ranged damage side, an indirect damage side, a discard side, a shield side, and a resource side. Doctor Aphra’s affinity for Droids gives you the ability to receive a one-resource discount on the first droid you play each turn. Furthermore, her knack for trouble lets you draw a card whenever you deal indirect damage to yourself.

Several cards in Legacies will allow you to inflict indirect damage on yourself for powerful effects. One of these is Aphra’s upgraded droid unit, BT-1  (Legacies, 24). BT-1 is a two-cost droid upgrade (or one cost if played with Dr. Aphra’s ability) and deals one indirect damage to yourself and your opponent whenever you activate it. Its die can also dispense damage, with two melee damage sides, two indirect damage sides, and a disrupt side. Rolling in BT-1 ensures your opponent will be taking at least a little bit of damage every turn from this support alone.

Doctor Aphra can also actively continue her dangerous hunt for artifacts, using Delve  (Legacies, 92) to deal one indirect damage to yourself to play a support or upgrade from your hand for free.

While in his older years, Obi-Wan Kenobi  (Legacies, 32) served as a mentor to Luke Skywalker, his legacy lies in the Clone Wars as a Jedi Master and General. This younger version of Obi-Wan Kenobi enters Destiny at fifteen points, or nineteen for an elite. His die includes two melee damage sides, two shield sides, and a resource side. Furthermore, anytime you activate Obi-Wan, you may give a character one shield. With both of his damage sides dealing an impressive three melee-damage, Obi-Wan provides both a solid offensive and defensive basis, protecting your characters while dishing out damage. 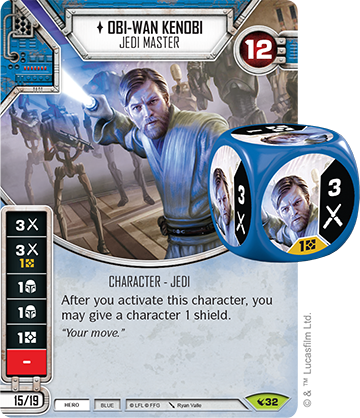 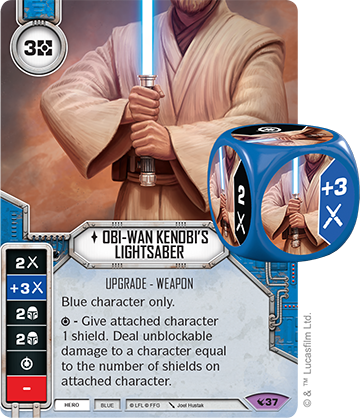 Obi-Wan’s impressive damage output can be amplified with his signature weapon, Obi-Wan Kenobi’s Lightsaber (Legacies, 37). At three-cost, the weapon features a melee damage side, a modified melee damage side, two shield sides, and a special symbol. This special mirrors Obi-Wan’s offensive and defensive balance, allowing you to give a shield to the attached character before dealing unblockable damage to a character equal to the number of shields on the attached character. This can help build a natural defense while still dealing out devastating damage.

Also, introduced in Legacies is the concept of the “Power Action,” abilities that may only be used once per round, and are found on multiple characters, including famed pilot Wedge Antilles  (Legacies, 41).

Wedge enters Destiny at eleven points for a normal version or fifteen for an elite. His die features an indirect damage side, a modified indirect damage side, a disrupt side, a shield side, and a resource side. His ability is a new Power Action that allows you to turn one of your vehicle dice to any side. This can ensure a powerful blow to your opponents from a vehicle like  Ghost  (Empire at War, 28) or a U-Wing  (Spirit of Rebellion, 31), but is of course limited to once per round. 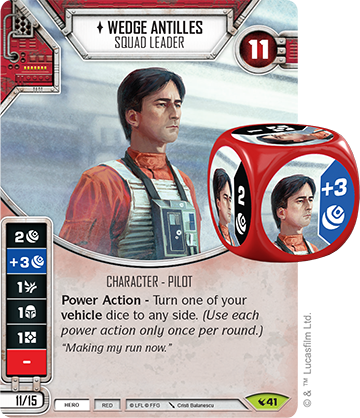 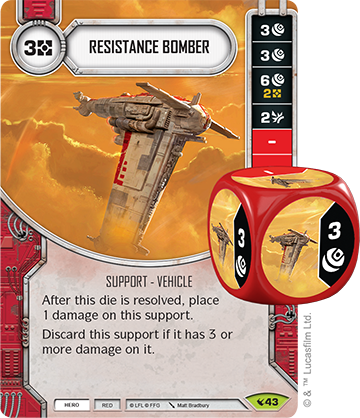 Damage on supports can also be used as a protective method—one-cost support Bubble Shield  (Legacies, 145) allows you to mitigate indirect damage by placing it on the support.

Since the beginning of Star Wars: Destiny, points for deckbuilding have resided purely on characters. With a thirty-point limit, any team that added up to less than that was playing with a disadvantage, resulting in little motivation to play a twenty-nine or twenty-eight point team. Legacies looks to expand on deckbuilding opportunities with new Plot cards. At the start of a game, you may choose a single Plot card to give you an advantage at the start of the game, in exchange for your deckbuilding points. 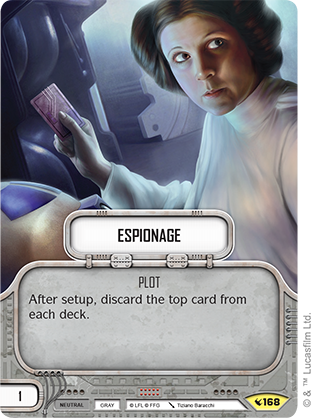 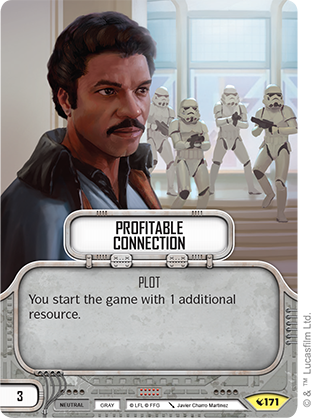 In Legacies, Plot cards cost between one and three points, allowing you to get to make a thirty-point deck even if your characters add up to a total in the high twenties. You can team an elite Lando Calrissian  (Empire at War, 39) with an elite Maz Kanata  (Spirit of Rebellion, 45) with a Profitable Connection  (Legacies, 171) Plot to start the game with four resources!